How To Draw A Train Cute with this how-to video and step-by-step drawing instructions. Easy drawing tutorial for beginners and kids.

Start by drawing an oval. This will be your starting point in front of the engine.

Extend straight, parallel, horizontal lines from the top and bottom of the oval, forming a cylinder.

Use a curved line around the cylinder.

Draw an arch around the cylinder. The arch shall consist of two straight, parallel, vertical lines, connected at the top by a curved line.

Extend two straight lines from the arch. Connect them with a curved line, enclosing another cylinder. Extend the bottom line through the cylinder and draw a short line below it, meeting at a right angle.

Draw the cabin of the train. Start by drawing three vertical lines. Draw a small curved line and a short straight line at the top of the outermost lines. Then connect the lines using straight lines, forming a three-dimensional shape.

Use two long and narrow rectangles around the bottom of the shape.

Draw a smaller arch within the previous arch. Then draw a curved line through the top of the smaller arch.

Inside the original oval, draw an oval within the oval. Then draw a star inside the innermost oval.

Draw a series of circles below the train to form the wheels. Then draw a curved line on one side of each wheel to give the wheels depth.

Draw the center of each wheel using a small circle within a circle.

Draw a “cow catcher” or safety net at the front of the train. Start by drawing a pentagon diagonally, almost upside down. Glue the three sides of the pentagon with narrow rectangles. Between the first and second wheels, draw a triangle within a triangle.

Draw the wheels on the other side of the train between the burn and the first and second wheels. Don’t forget the curve that adds depth and the circular center caps.

Draw the smoke compartment on top of the large cylinder. Extend short, parallel lines upwards. From parallel lines, draw diagonal lines, and then another set of parallel lines. Connect lines using a curve and add detail by crossing curves on the smoke stack.

View details of the front of the train. Draw a curved rectangle over the large cylinder and cut it with a set of diagonal lines. On the small cylinder, enclose a shape using a curved line.

Draw the line below the train using three parallel lines. The close lines form one side of the track. Draw lines between the top and midline to form diagonal ties.

Enclose a shape above the chimney using multiple curves. This cloud-like shape is steam or smoke produced by a train’s engine. 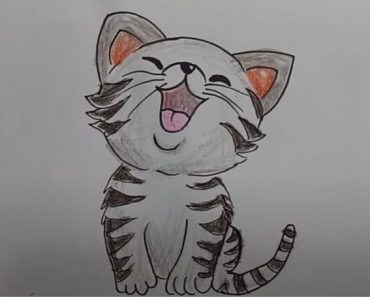