How to Draw Baby Dory with this how-to video and step-by-step drawing instructions. Easy animals to draw for beginners and kids.

Start by drawing a long and curved line. It should form an unjoined circle at the top, with heart-like lobes. This outlines Dory’s face.

Draw a curved line through the top of the shape, connecting the two lobes. This forms Dory’s dorsal fin.

Extend a pair of curves outward from the side of the shape, allowing them to meet at one point. This forms Dory’s pectoral fins.

Extend a pair of curved lines from the opposite side and connect them with a curved line. This forms the remaining pectoral fin.

Draw a large circle that overlaps the edge of the shape. This forms Dory’s eye.

Draw a large circle that overlaps the opposite side of the shape. This forms the remaining eye.

Erase lines from behind the eyes.

Draw two consecutive smaller circles in each eye. Draw a C-shaped notch in the smaller circles, then shade them to form the pupil. Draw a wide U-shaped line to form the smiley mouth and paint a dot at each end. Fins each pectoral fin have two curves.

Dory color. As a blue tang or royal tang, it is dark green with yellow fins and black markings. Her eyes are pink or purple 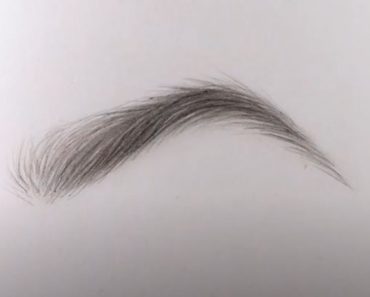